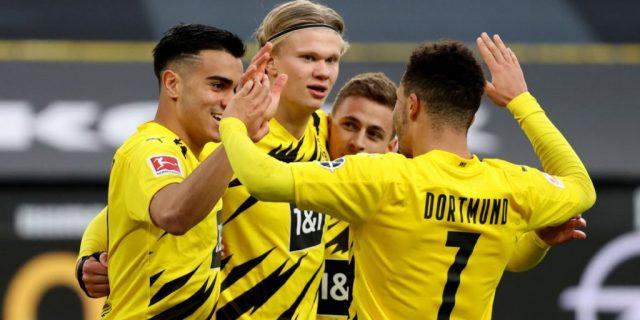 Jadon Sancho scored the only goal of the game between Borussia Monchengladbach and Borussia Dortmund as the latter booked their place in the semi-final of the DFB Pokal.

Playing at Borussia Park, the home side were hopeful of inflicting the first loss on their rivals but were rather dealt with a blow when the England international opened the scoring.

Marco Rose’s men controlled the game in terms of the majority of possession and chances created, with two of their five targets going on target as Dortmund failed to do the same.

Erling Haaland should have put his side in the lead in the 36th minute after he was played through on goal, facing just the keeper. But the Norway international blew his effort wide of the post.

Just before the half-time whistle, Marcus Thuram had a goal ruled out for offside after the VAR intervened.

Monchengladbach after recess still had the upper hand in the game, dictating play and making things difficult for the Black and Yellows, who gradually grew into the game with time.

But it was Edin Terzic’s side who scored the game’s only goal with Sancho finishing a lightning-quick counterattack.

Tobias Sippel, in goal for the home side, denied Haaland from doubling his side’s lead in the 83rd minute before Mohammed Dahoud was shown the exit for a second booking.