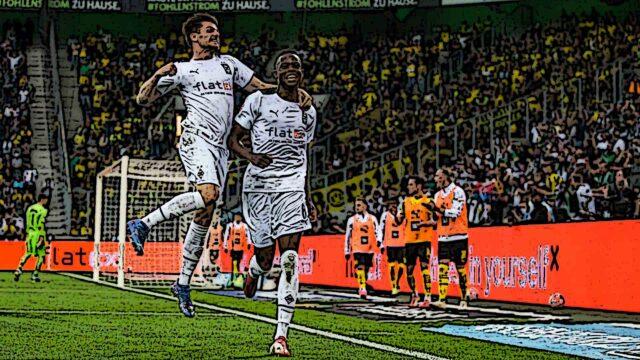 Marco Rose’s return to Borussia Park didn’t go quite to plan after his Borussia Dortmund side were beaten by Borussia Monchengladbach on Saturday.

BVB went into the game the better side after what looks to be one of their best starts to the Bundesliga season.

After seeing Wolfsburg lose earlier in the day, Dortmund were looking to move into the second position but all efforts to achieve that failed to materialise.

Mahmoud Dahoud received two yellow cards before being marched off the field by referee Deniz Aytekin, all happening in the first half of the encounter.

Dortmund were without attacking duo, Erling Braut Haaland and Marco Reus for the game after the pair picked up muscle and knee injury respectively in the last training session.

Their absence was indeed very evident all game as the Black and Yellows struggled to create much chances throughout the game.

Rose’s men failed to register a shot on target throughout the game, though the away side was also far from their usual best.

However, a Denis Zakaria strike in the first half of the game was enough to give Adolf Hutter’s side all three points on the day.

Youssoufa Moukoko and Donyell Malen were entrusted to lead the line for Dortmund in the absence of Haaland and Reus as the team lined up in a 3-5-2 formation.

With not so many chances created in the opening stages, Monchengladbach scored the opener with the first shot of the game as Zakaria cooly dispatched his effort past Gregor Kobel to put the host in the lead.

As if the evening wasn’t frustrating enough, Dahoud, who had received his first booking in the 10th minute was shown a second yellow card before being sent off in the 40th minute, though that decision looked more of a harsh decision from the referee.

Thorgan Hazard was thrown into the picture by the Dortmund gaffer as he looked for an immediate response in the second half.

Despite a much-improved performance after the recess, Dortmund were unable to penetrate the defence of Monchengladbach. Even when they did, they lacked the clinical edge to draw them level.

The final whistle only meant that Dortmund suffer a second league defeat this season, having lost to Freiburg earlier this campaign.