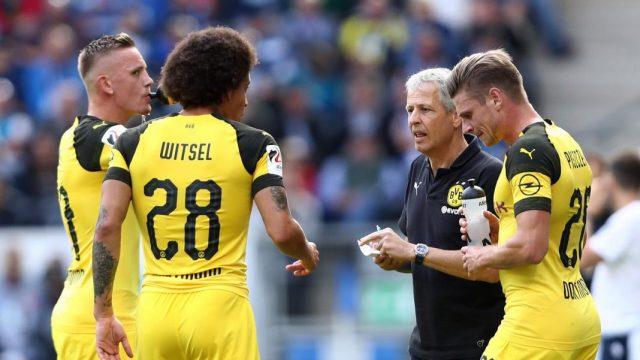 Lucien Favre has urged his players to work closely with the club’s sports psychologist to help them adjust with playing behind closed doors during their derby against Schalke this weekend.

The Bundesliga is set to resume on Saturday after being given the go-ahead to resume by the government.

The authorities will also adopt certain measures to ensure that more lives are not risked with a maximum of 322 people going to be allowed around the stadium.

Holding his press conference ahead of the game, Favre said: “A match without spectators is really different and we have to be well prepared.”

“It’s a question of mentality, which is very important.

“You put in a pass or you shoot and no-one reacts, so we had to prepare for that and it’s very good that we have a sports psychologist involved.”

The derby game against Schalke always grows with intense with ‘cheers and jeers’ from the fans with almost about 82,000 spectators present during such games.

But due to the coronavirus, 156th derby between Dortmund and Schalke is set to be played behind closed doors with green light from authorities ad part of measures to slow the pace of the virus.

“It was a difficult situation for everyone,” said sports director Michael Zorc. “A derby without spectators makes your heart bleed.

“We therefore need a higher level of self-motivation.

“Since the date was fixed, you can see that the joy in the team has returned.”

The league will also implement the usage of five substitutions in the rest of the games.