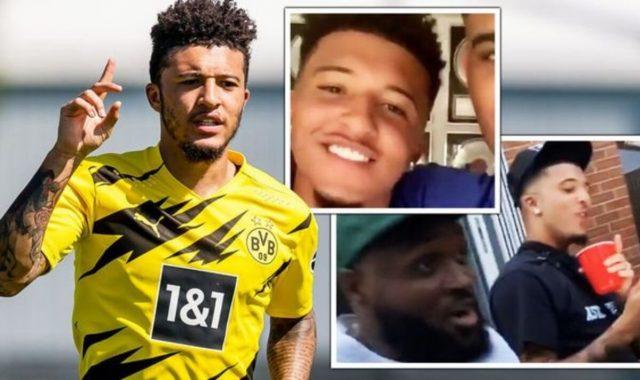 Borussia Dortmund are not bothered by Jadon Sancho’s decision to travel back to England during the coronavirus pandemic amid reports of a summer move to Manchester United.

Video broke out on social media which saw the Dortmund winger attend a party after returning to his homeland this weekend.

United have been heavily linked with the 20-year-old and his decision to go back to the UK has sparked another controversy over a possible move this summer.

However, with the Black and Yellows expected to jet off to Switzerland on Monday for their training camp, the German club have reported set an August 10 deadline for the English side.

The club also expressed they were happy to see the England international make the trip back to England ahead of their preparations for next season, adding that he broke no coronavirus protocols.

“It’s common and fine for players to go home before a training camp if they’re not risky,” Dortmund’s press spokesman Sascha Fligge said. “The same goes for Jadon. From our point of view, the pictures that have been shown to us do not violate the current Coronavirus Protection Ordinance or hygiene regulations.”

Both clubs are believed to be far apart from reaching an agreement for any deal, with the Red Devils reluctant to meet Dortmund’s valuation of the former Manchester City youngster.

Sancho is already reported to have agreed personal terms with Ole Gunnar Solskjaer’s side, and is waiting for a deal to be struck between the two teams with negotiations still continuing.

But Hans-Joachim Watzke denied such reports, indicating that no talks have been held for the youngster.

“So far, there has been no contact between Borussia Dortmund and Manchester United in terms of Sancho,” he told Suddeutsche Zeitung. “Also not directly or through alleged intermediaries.”

The Englishman scored 17 goals and assisted a further 16 in 32 Bundesliga games during the 2019/20 season.