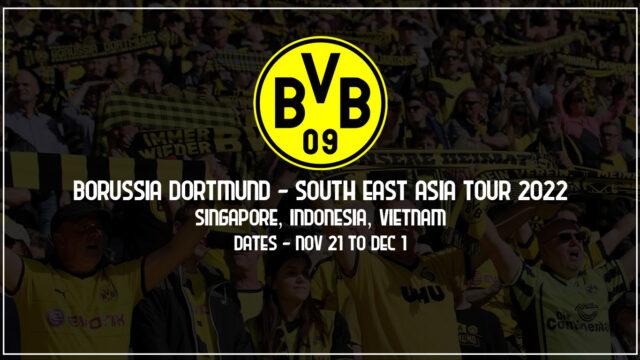 With the World Cup on horizon in the mid-season, the annual workings of European football are about to be disrupted as the most recognised of faces will board that plane to Qatar come November. While the talks about Qatar are in ample, very less come through to speak up on players who will watch it from their couches. Wouldn’t a month off in the mid-season make things rusty?

While different clubs play about 50-60 games per season, squeeze in the World Cup that number is about to rise for countless players, while that will affect the injury outcome we’d see post scenes in Qatar – it’s necessary to maintain the conditions of players who’d still be at the club during FIFA World Cup.

Borussia Dortmund have come with a solution that’d delight the supporters as well as serve oil to players to assure they don’t get oxidized.

The German giants, on Monday, announced that we will be touring South-east Asia from Nov 21 to Dec 1 and keep warm with “play(ing) a match against a local team” in Singapore, Indonesia and Vietnam. Exact details comprising of dates and opponents should be announced in due time.

Die Borussen Die Schwarzgelben do have established an office in Singapore since 2014, and last visited the country in 2015 when they played a friendly match at Johor Darul Takzim with a couple of meet-and-greet sessions.

Plans at Dortmund did schedule a return in 2019 and 2020 for International Champions Cup although the global pandemic meant that was far from possible then. But finally, the Bundesliga and Dortmund faithful’s in south-east Asia will get to watch Borussia Dortmund live.

Carsten Cramer, managing director at Dortmund said: “Following the agonisingly long period of restrictions due to the corona pandemic, it is a great pleasure for us to finally be able to pay a visit to our many fans and partners in South-east Asia once again.

“We’ve felt very welcome in the region for many years and can’t wait to personally thank the people for their passion, but also for their patience.”

Sebastian Kehl, sporting director, furthered that – “the unique interruption to the season… represents an unusual challenge for all clubs,” going on to add a note that this trip will also serve a chance to Under-23 and Under-19 players “whom we want to introduce to the senior squad at a high level”.

Head Coach Edin Terzic was also quick to note his excitement too meet and celebrate shared passion with East Asian fans: “When there’s a tight fixture schedule, there’s usually hardly any time on trips abroad to get in touch with the country and its people.

“It’s different in this exceptional case, and in addition to some enticing sporting match-ups, I’m looking forward to meeting as many Black and Yellow fans as possible from countries in South-East Asia and celebrating our shared passion for our BVB with them.”

While many star players will be missing out from the tour, this proves an exciting time for an abundance of fans to look forward to which will also prove a massive help in Dortmund’s grind in growing their global (especially Asian) presence.