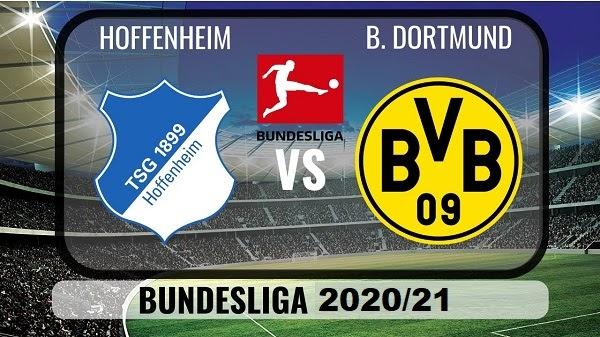 It’s game week 4 of the Bundesliga! On Saturday, 17/10/2020, Borussia Dortmund will face their most dreaded opponents, i.e., TSG 1899 Hoffenheim. The 2 clubs are currently 5th and 6th placed, separated only by goal difference, which gives the tie a bit of extra spice.

After successive defeats against Augsburg in the Bundesliga and Bayern Munich in the DFL Supercup final, Dortmund came back stronger to beat Freiburg 4-0 before the international break.

Hoffenheim, on the other hand, lost their most recent game to Eintracht Frankfurt 2-1. This came just a week after their surprise thumping over Bayern Munich at the Rhein-Neckar Arena.

Borussia Dortmund: Although Thorgan Hazard has started some light running sessions, he will not be ready to face Hoffenheim on Saturday.

The major injury concerns stem from the lack of defensive options. Manuel Akanji, who tested positive for COVID-19 during the international break, is currently self-isolating and hence will not take part in the clash against Hoffenheim. Dan-Axel Zagadou and Nico Schulz are not ready either.

Mateu Morey will face a late test to see if he can be a part of the squad against Hoffenheim. This comes after an infection he picked up during the international break.

Hoffenheim: Hoffenheim will be withot central defender, Ermin Bicakcic, who tore his cruciate ligament in match week 2 of the Bundesliga. Left-back Kostas Stafylidis is still recovering from his shoulder injury. They will also be without club captain, Benjamin Hübner, who is out with a ligament lesion.

Borussia Dortmund have not earned a victory over Hoffenheim since December 2017, when a late Christian Pulisic goal won the game for Dortmund.

In the 2019/20 season, Hoffenheim beat BVB home & away for the first time. This includes the most recent clash between the clubs at the Signal Iduna Park when Dortmund were embarrassed by 4 goals from Hoffenheim’s goal-getter Andrej Kramaric.