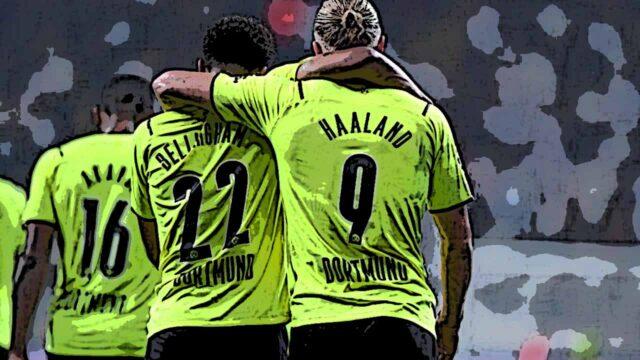 BVB opened their UEFA Champions League campaign with a 2-1 win away from home on Wednesday.

Besiktas looked confident against Dortmund ahead of the game having gained a return to Europe’s biggest club competition once again, but the Black and Yellows were too good for Turkish giants.

With their fans solidly behind them, Besiktas made an impressive start to the game with former Dortmund forward, Michy Batshuayi testing Gregor Kobel in the early stages of the game but the keeper was on hand to make a good save.

While the German side looked for the opening, they played some good football and saw some great exchanges on the left flank between Marco Reus, Raphael Guerreiro, and Donyell Malen.

However, it was young Jude Bellingham who found the back of the net for the match’s opening goal. The teenager slipped his way through the Besiktas defence before firing his shot past the Besiktas shot-stopper in the 22nd minute of the game.

The former Birmingham City midfielder continued his great start to the campaign so far as he broke the deadlock on the night. His goal opened up the game and Dortmund capitalised on some lose spaces to score their second.

Bellingham teed up Haaland just before the half-time break, as the Norway international bagged his 21st Champions League goal in his 17th appearance to give Marco Rose’s side a 2-0 cushion.

After the recess, both teams went at each other in search of goals. On the path of Dortmund, Reus Bellingham, Haaland, and Meunier all failed to convert the chances that fell their way while substitute Ansgar Knauff struck the woodwork.

Dortmund’s failure to add to their two-goal lead saw the home team pile a lot of pressure on them in the closing stages of the game with Francisco Montero pulling one goal back for the Turkish side.

The centre-back met a beautiful cross with his head, beating Kobel to put a smile on the faces of the home crowd present at the stadium.

Their efforts came a little too late as Dortmund ended up as a winner in the first round of group games in Group C.