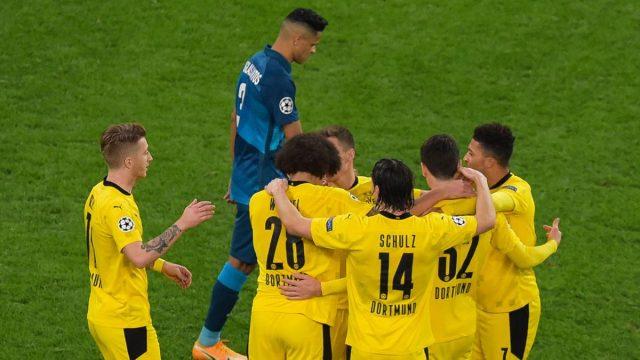 Borussia Dortmund secured a 2-1 victory over Zenit Saint Petersburg at the latter’s home ground thanks to late goals from Lukasz Piszczek and Axel Witsel.

Lucien Favre made a series of changes, some due to injuries and others to give players a rest.

Zenit started putting pressure on Dortmund’s back-line from the get-go and reaped the rewards for the same in the 16th minute. Sebastián Driussi’s deflected shot finished a quick move, which started from a throw-in. Mats Hummels deflected the ball away from Marwin Hitz, leaving him wrong-footed and helpless.

Dortmund’s primary attacking threat was from Nico Schulz at left-back who delivered a beautiful cross on to the head of Jude Bellingham, but the 17-year-old’s attempt went over the bar.

Just a few minutes later, on the stroke of half-time, Marco Reus hit the woodwork. Axel Witsel spotted his skipper free at the edge of the box, from where Reus tried to curl the ball into the top corner. His shot had Kerzhakov beaten. However, the post prevented Dortmund from levelling the score.

The home side started the second half, just like the first, on the front foot. Marwin Hitz’s double save from Malcom and Kuzyaev’s close-range attempts prevented Dortmund’s deficit from extending to 2-0.

Lucien Favre’s side failed to create chances until the Swiss Manager brought on Giovanni Reyna and Youssoufa Moukoko to replace Felix Passlack and Julian Brandt in the 58th minute.

Lukasz Piszczek levelled the scores just 10 minutes after the substitutes came on. The goal came from a corner when the veteran scored a rebound attempt after Hummels saw his poked attempt saved by Kerzhakov.

To secure all three points, Favre made another double substitution. This time Jadon Sancho and Dan-Axel Zagadou came on for the duo involved in the goal, Piszczek and Hummels.

Despite the presence of Reus, Sancho, Reyna, Moukoko, Hazard, and Bellingham, the winner came from Axel Witsel. The former Zenit man caught the goalkeeper off-guard and decided to take on a long-range shot on his weaker foot. The Belgian’s shot wasn’t the cleanest, but it was enough to sneak into the near post.

The win guaranteed top spot for Borussia Dortmund in Group F of the Champions League, with Lazio finishing second in the group.