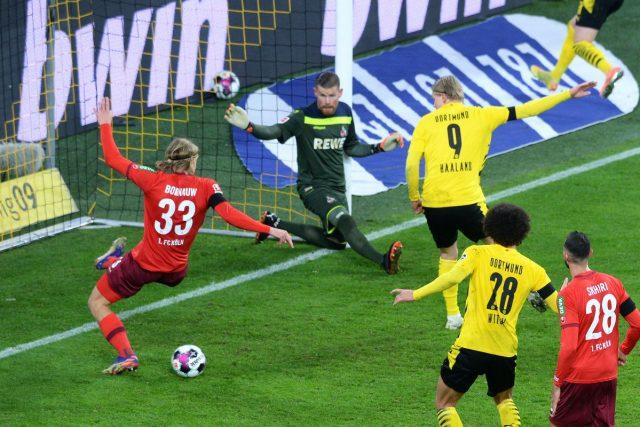 Thorgan Hazard’s goal in the 74th minute for Borussia Dortmund to salvage a point in a shock 2-1 defeat to FC Koln. The hosts were obvious favorites going into the game, yet a double from Ellyes Skhiri gave Koln the win.

The visitors took the lead in the 9th minute via a set-piece. It was Dortmund loanee Marius Wolf’s flick-on header at the near-post which found Skhiri unmarked at the back stick. Dortmund failed to come up with an answer in the first half, as they look uninspired and tired. Cologne was organised in defence and didn’t let Dortmund muster too many chances.

After the game, Lucien Favre spoke on the visitor’s tactical set-up. He said, “Cologne were very organised. Their approach was to sit back, they played well. We lost our patience a little bit and sometimes rushed it.”

Skhiri extended the lead through another goal at the back-post, from another corner. In fact, it was a near carbon-copy of the first goal, with Wolf flicking on another header towards the Tunisian midfielder.

Wolf hadn’t managed a single assist for Dortmund but returned the favour twice against his parent club in one game.

Lucien Favre was unimpressed by his side’s tempo in the second half, which he made clear in a post-match press conference. He said, “We should’ve played with more tempo, passed the ball with more tempo. And we were lacking the correct movement. We had too few clear-cut goal-scoring chances.”

This prompted three changes for Dortmund, as Giovanni Reyna, Youssoufa Moukoko, and Thorgan Hazard all came off the bench. As a matter of fact, it was this trio that combined for Dortmund’s only goal. The 16-year-old Moukoko played a quick and short pass to Reyna, who in turn fed in Hazard on the left. The Belgian International finished superbly with a finessed shot into the bottom right corner of the goal.

Dortmund had the golden opportunity to salvage a point in the depths of the game, however, a rare Erling Haaland miss prevented them from doing so. The Norwegian striker is in fine form but failed to find the back of the net from less than 3 yards out.

Dortmund slipped down 1 place on the table and could go further down to fourth place depending on Bayer Leverkusen’s result against Hertha Berlin.