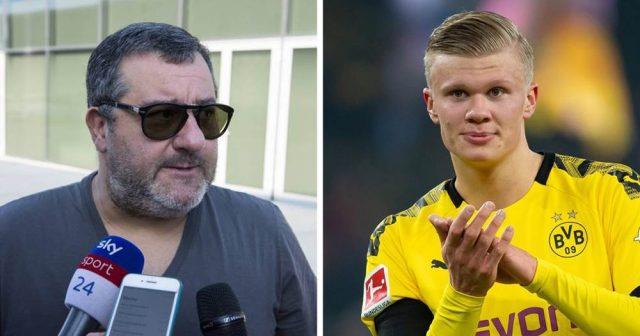 Erling Haaland’s agent, Mino Raiola, has spoken out on the Norwegian striker’s future at Borussia Dortmund. The super-star agent who represents the likes of Paul Pogba, Zlatan Ibrahimovic, Marco Verratti, is known for his outspoken and brazen manner of dealing with clubs.

In an interview with Tuttosport, Raiola said that Haaland is happy with Dortmund. When asked about the winner of the Golden Boy Award’s release clause in his contract, he said, “I can’t talk about Haaland’s release clause. Rumours say Real Madrid want him? This is not new to me, but he is very happy with Borussia Dortmund.”

He also made it clear that if Haaland chooses to leave Dortmund, it would be for ambition and not money. His dream is to win the Champions League and Raiola said, “If one day he’ll decide to leave the club, he’ll give me a call and we’re going to plan.”

The agent also targeted a dig at Manchester United manager, Ole Gunnar Solskjaer, who previously managed Haaland. He said, “Solskjaer is a good guy, but he was totally wrong when he said that Erling is like Lukaku. It would be better if Solskjaer thought about finding a way to make Pogba play like a champion, instead of talking about Haaland.”

Manchester United was previously in a race to sign Haaland from RB Salzburg, however, it was Borussia Dortmund that won the race.