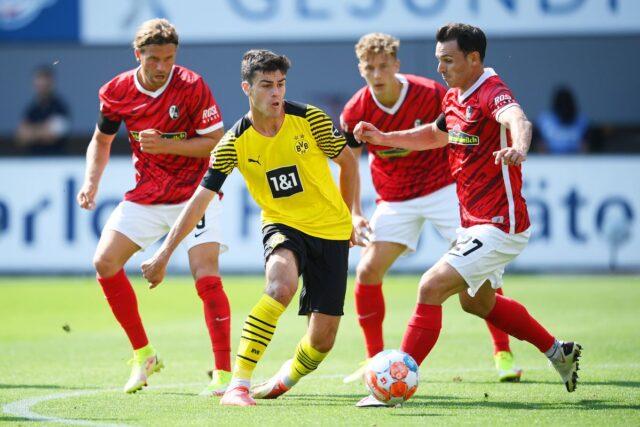 After a strong showing in the loss to Bayern Munich in the German Super Cup, Borussia Dortmund were expected to brush aside SC Freiburg in the league game over the weekend.

However, the Black and Yellows were always going to play second fiddle to the home side from the blast of whistle in the first minute of the game.

Complacency, avoidable errors, and faulty passes saw Dortmund suffer their first league defeat as they were beaten 2-1 by Freiburg.

Marco Rose made one change to the team that lost to Bayern in the Super Cup with Donyell Malen coming in for Youssoufa Moukoko.

Freiburg took the lead in the sixth minute of the game through Italy international, Vincenzo Grifo – an opener that looked to have frustrated the away side.

Malen and Mahmoud Dahoud were booked in the first half while Nico Schulz’s unconvincing performance forced Rose to bring in Raphael Guerreiro.

Dortmund went into the break trailing by a goal as Freiburg matched on.

After the recess, Christian Streich’s side doubled their lead and piled more misery on Dortmund but an own goal from Yannik Keitel in the 59th minute seemed to have sparked a comeback from Dortmund but the Black and Yellow lads could do little to draw level.

The game ended 2-1 in favour of Freiburg as Dortmund missed out on the opportunity to return to the top of the Bundesliga.