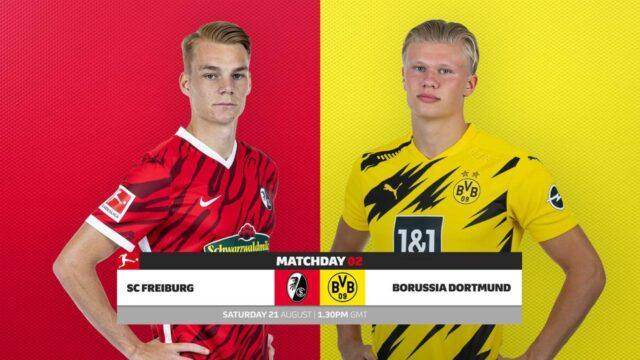 Following an unconvincing goalless draw in their opening league game last weekend, SC Freiburg will feel they have an opportunity to amass the first three points of the season when they host Borussia Dortmund.

Freiburg were held to a 0-0 draw by Arminia Bielefeld away from home in their first game while Dortmund started the season with a great win over Eintracht Frankfurt.

Marco Rose’s side put five goals past Frankfurt in the league opener while conceding twice as he grabbed a dream start.

Against Freiburg, Marco Rose will need to assemble the best of players on the pitch to overcome the tireless opponent. Dortmund have won two of their last five visits to Freiburg, losing one and the other two ending in stalemate.

Nils Petersen and Nishan Burkart have been ruled out of Saturday’s encounter by manager Christian Streich due to respective injuries, while Manuel Gulde is a doubt for the game also.

For Dortmund, they have more players sidelined due to injuries, with Dan-Axel Zagadou, Julian Brandt, and Mateu Morey some notable names on the treatment table. Six of the first team players are also said to be doubts leaving Rose with few options to choose from for the game.