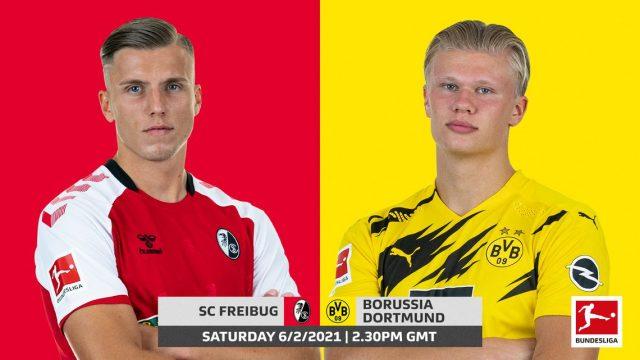 Having sealed a dramatic extra-time win in their DFB Pokal game on Tuesday, Borussia Dortmund returns back to league action on Saturday against SC Freiburg.

In the top-flight, Dortmund have struggled in terms of consistency of results, with the win over Augsburg last weekend ending their three-game winless run.

SC Freiburg also suffered a heavy defeat to Wolfsburg in their last league game away from home and will hope their return to the Schwarzwald-Stadion will be a spark in their form.

The Black and Yellows are yet to suffer a defeat against SC Freiburg in their last 19 meetings across all competitions, winning 16 and drawing the other three.

Manager Christian Streich will be looking at bringing such a poor record against Dortmund to an end but he will definitely need his boys to be up to the task.

Chang-Hoon Kwon looks to be the only player to be on the sidelines for the home side after both Mark Flekken and Roland Sallai returned to the team’s training this week. With no new injuries suffered, Streich should have almost everyone available for the game.

For Dortmund, they have quite a number of first-team players on the sidelines. Goalkeeper Roman Burki, Thomas Meunier, Thorgan Hazard, Dan-Axel Zagadou, Marcel Schmelzer and Axel Witsel are all in the injury room.