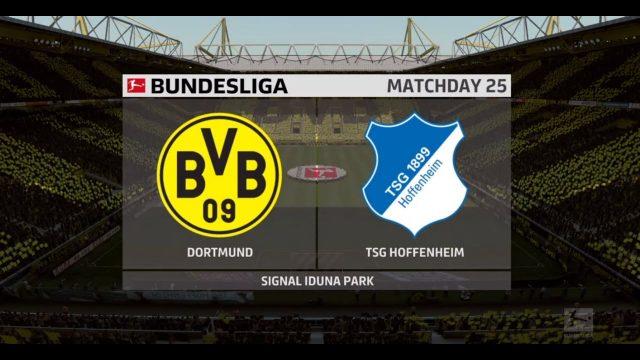 Borussia Dortmund will play their last game of the 2019/20 Bundesliga campaign when they play host Hoffenheim at the Signal Iduna Park on Saturday.

Hoffenheim need maximum points to qualify them to the Europa League next season and would be doing everything possible to attain the points.

Dortmund followed the shock defeat to Mainz 05 with an impressive win over third-placed RB Leipzig with Erling Braut Haaland scoring both goals for the Black and Yellows.

Marcel Rapp’s appointment as interim boss at Hoffenheim have seen them taken six points from their last three games including wins over Augsburg and Union Berlin.

BVB lost the reverse fixture back in December by 1-2, but with the introduction of the Norwegian teenager they will be hoping to avoid a double defeat to Rapp’s team.

Dortmund have nothing to lose ahead if the clash, as a second spot have already been booked. In their last five games, the defeat to Mainz was the only low Lucien Favre’s side got, winning the other four.

The away side will need a positive results to keep them in a place to play in Europe next season. They have won three times in their last five games in the Bundesliga.

For Dortmund, Marcel Schmelzer is a doubt, Thomas Delaney, Manuel Akanji, Mahmoud Dahoud and Marco Reus have all been ruled out through respective injuries. Mario Gotze is also expected to miss the game.

Favre is also expected to only make few changes to the starting lineup that beat RB Leipzig last weekend to seal the second position.

Hoffenheim have little injury concerns heading into the contest. Ishak Belfodil is ruled out of the game, while Sargis Adamyan and Konstantinos Stafylidis are also doubts for the game.