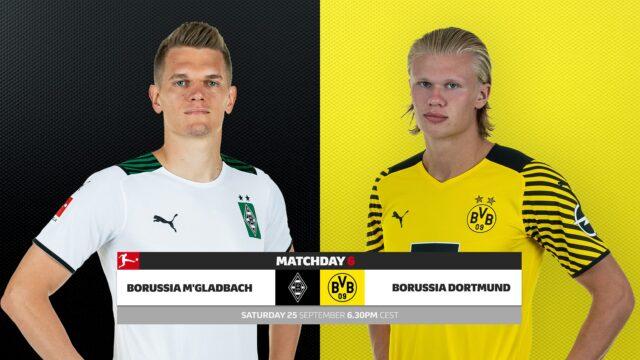 It is expected to be one of the mouth-watering games of the weekend when Borussia Monchengladbach host Borussia Dortmund on Saturday.

While Dortmund will be glad about the start to life under Marco Rose, Monchengladbach are far from settling under Adolf Hutter.

The Black and Yellow lads have lost just one of their five league games, winning the other four as they currently occupy the third spot on the league table.

Monchengladbach on the other hand, are languishing in 16th place after five games played. The team has taken just four points of the available 15.

Hutter’s side has lost three games in the league and are currently struggling to replicate their performance last season.

For Rose, the game against Monchengladbach will be the first opportunity to return to the club he last managed before moving to the Signal Iduna Park.

Dortmund have had the upper hand over Monchengladbach in recent times even when playing away from home.

While the last game at Borussia Park in the league went in favour of Monchengladbach, Dortmund has won five of the last six away games against Saturday’s opponent.

Erling Braut Haaland is one name that the home team will be looking to keep an eye on considering his impressive numbers for Dortmund this season while Marco Reus is another threat to be wary of.

Marcus Thuram’s spell on the sidelines is set to continue with Stefan Lainer also unlikely to feature but Ramy Bensebaini is set to return to action on Saturday. Mamadou Doucoure has been ruled out again with an Achilles injury while Jonas Hoffman is a doubt.

For BVB, Mateu Morey, Giovanni Reyna, Julian Brandt, Emre Can, Steffen Tigges, and Dan-Axel Zagadou are all on the treatment table and are unavailable for the encounter.