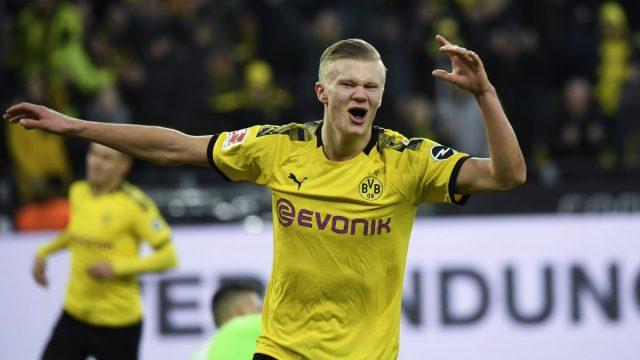 Erling Haaland has insisted he has no issues with Bayern Munich possessing world class talents in their squad ahead of their crunch encounter.

Dortmund welcome Bayern to the Signal Iduna Park looking to reduce the gap between the two as they are four points adrift the leaders.

Bayern defensive line pose a threat to the high flying attacker but he has insisted that he feels no pressure coming against the likes of Jerome Boateng, Benjamin Pavard and Manuel Neuer.

“No [pressure doesn’t bother me]. I like to play these games and that’s what I like the most, to be honest,” Haaland told Dortmund’s YouTube channel.

“I’m looking forward to a game against a very good Bayern side.

“I try to be as calm as possible and not think too much about the game. They have World Cup winners, but we also have that.

“I see every team-mate every day in training and I see how good they actually are and it’s all about getting that out as a team to achieve our goals, so I’m looking forward to the game.”

Talking of World Cup winners, Mats Hummels and Mario Gotze both of former Munich players, the pair had little impacts as Dortmund were beaten by four goals to nil against Munich earlier in the season.

Haaland is optimistic his teammates will be up to the task when the pair meet again in the Bundesliga on Tuesday.

“First of all is to try to play our best as a team because I know how much quality we have in the team,” Haaland continued.

“When we show that, we create chances and play like a fantastic team. For me, my job is to score goals, of course.

“You’ve seen in the last few games that not only I score, but so do the full-backs and midfielders. Everyone can score and that’s something good that we have in our team.”