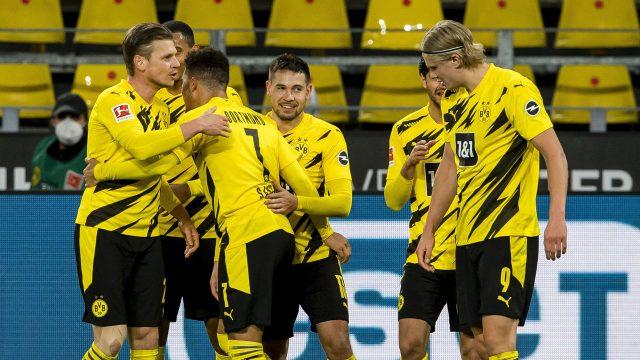 Borussia Dortmund moved back to just within four points off Eintracht Frankfurt following their 2-0 win over Union Berlin on Wednesday night.

Looking at securing qualification for next season’s UEFA Champions League, Dortmund are out of the top four spots in the Bundesliga and have to win all their games left if they are to achieve their aim.

However, on Wednesday the club played one of their best games of the season as they defeated Berlin by two goals to nil.

Erling Braut Haaland should have put the home side in the lead after just 27 minutes but the Norway international missed from the penalty spot as Andreas Luthe saved his effort but Marco Reus was on hand to convert the rebound.

That goal was the Germany international’s fifth goal of the season as he spared Haaland’s blushes.

A vital counter-attack saw Dortmund double their lead at the Signal Iduna Park as Raphael Guerreiro found the back of the net.

Edin Terzic introduced Jadon Sancho into the game in the 59th minute, the England international having to battle an injury which saw him miss the Champions League quarter-finals game against Manchester City.

Dortmund now faces Wolfsburg in their next league game, hoping that a win could see them close the gap and help guarantee Champions League football next season.