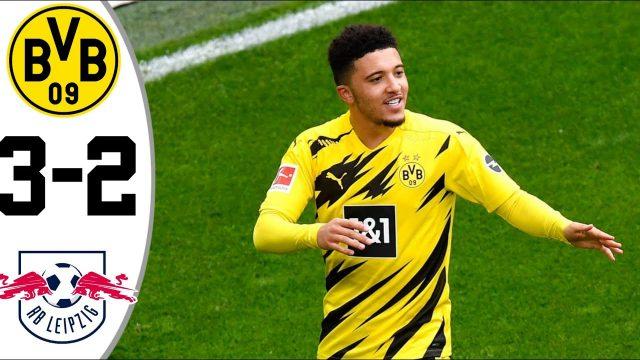 Jadon Sancho proved too hot for RB Leipzig on Saturday afternoon after his brace propelled Borussia Dortmund into the fourth position on the league table.

Dortmund continues their fight to qualify for next season’s UEFA Champions League and headed into this fixture one point behind Eintracht Frankfurt.

Marco Reus broke the deadlock in the seventh minute of the game to give Edin Terzic’s side the lead at the Signal Iduna Park – making fruitful Thorgan Hazard’s pass.

That was the only goal the first 45 minutes of the game saw with Dortmund heading into the break with the advantage.

A moment of magic from Jadon Sancho doubled the home team’s lead after the recess, this time Raphael Guerreiro registering his 10th league assists for the 2020/21 campaign.

Marwin Hitz was withdrawn at half-time with first-choice goalkeeper Roman Burki returning to the post for the first time in a long while.

Lukas Klostermann pulled one back for Julen Nagelsmann’s team after the hour mark to get them back into the game with Dani Olmo drawing them level moments later.

It looked as if the game was heading for a draw after Olmo’s goal but Sancho stepped up once again to restore Dortmund’s lead and send them to fourth at the expense of Frankfurt who plays on Sunday.

Both Leipzig and Dortmund go head-to-head once again next week Thursday in the final of the DFB Pokal.