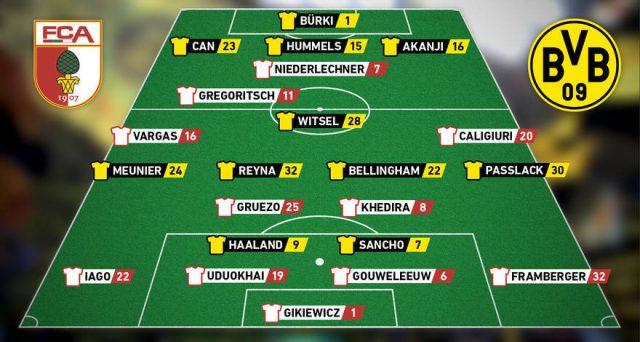 It’s game week 2 of the Bundesliga! Borussia Dortmund travel to the WWK Arena to take on FC Augsburg on Saturday, 26/09/20.

A win for BVB will take them to the top of the table, as Bayern Munich only play tomorrow.

Borussia Dortmund’s Bundesliga campaign got off to a fine start. The “Black and Yellows” beat top-4 side Borussia Monchengladbach with a convincing 3-0 victory.

Augsburg’s start was rather impressive too, as they staged a late comeback against Union Berlin to seal a 3-1 win.

Prior to the start of the Bundesliga, both clubs sailed through the first round of the DFB-Pokal cup with Augsburg winning 7-0 against Eintracht Celle, and Dortmund beating MSV Duisburg 5-0.

Borussia Dortmund: Throgan Hazard’s endured a muscular injury in the game against Borussia Monchengladbach, which rules him out for the Augsburg clash.

The game may hand Felix Passlack his first start for Borussia Dortmund in ages. He is likely to replace Thorgan Hazard at the left wing-back spot, owing to the Belgian’s muscular injury.

Apart from Hazard, BVB will be without Matheu Morey and Nico Schulz as they have not attained match fitness yet. Dan-Axel Zagadou and Marcel Schmelzer remain absent owing to their knee injuries.

FC Augsburg: Augsburg have only one confirmed absentee, that is midfielder Jan Moravek owing to a muscular injury.

Both the Dortmund v Augsburg clashes in the 2019/20 Bundesliga season were goal-feasts. With BVB scoring 5 goals in both games. The first game, held at the Signal Iduna Park, was a 5-1 victory with Dortmund conceding in the first minute, but then went on to score 5 goals.

The second game was at Augsburg, and it was the day Erling Haaland introduced himself to the Bundesliga. On debut, the Norwegian scored a hattrick, which helped BVB seal a 5-3 win.

The game is almost certainly going to involve goals, with the last 0-0 fixture between the teams in 2012.