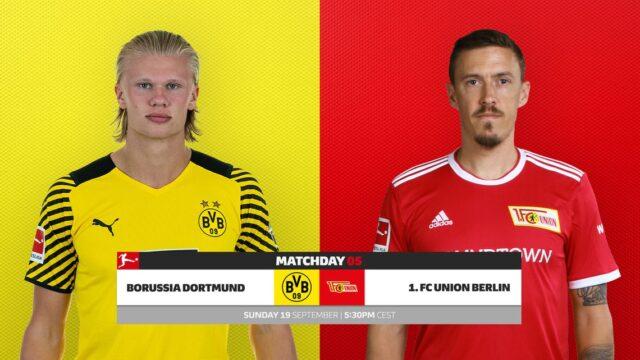 Union Berlin will face Borussia Dortmund in matchday five of the German Bundesliga at the Signal Iduna Park on Sunday.

BVB could move to the second position on the league table should they manage a win against Berlin in the encounter.

In the four games played so far, the Black and Yellow lads have three wins, losing the other one while Union Berlin have one win and three draws in that same period.

Dortmund currently occupies the fourth position with nine points with Union Berlin sitting in the eighth position on the log with six points.

The two managers have faced each other four times in their coaching career, a win each for both Marco Rose and Urs Fischer – the other two ending in a draw.

Dortmund has won five out of their seven encounters against Union Berlin, the latter also winning twice including last season’s 2-1 win on home grounds.

Rose has quite a number of injury concerns in his team ahead of the game on Sunday. Emre Can, Soumalia Coulibaly, Thorgan Hazard, Mateu Morey, Marcel Schmelzer, Steffen Tigges and Giovanni Reyna are all on the treatment table. Nico Schluz and Julian Brandt are also doubtful.

Union Berlin has limited injury concerns with just Kevin Mohwald looking unlikely to feature in the fixture. Everyone else is available for selection for the gaffer.