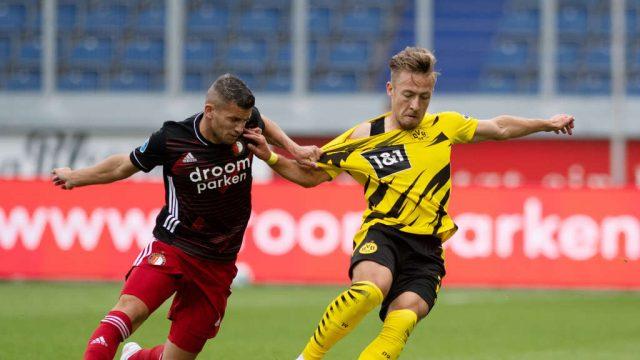 Borussia Dortmund’s performances in the Cup of Traditions was a mixed bag. The Cup of Traditions is an annual pre-season tournament conducted between three European footballing teams. This year’s participants were BVB, Feyenoord Rotterdam, and MSV Duisburg. The games conducted were 60 minutes each.

Dortmund’s unbeaten pre-season streak came to an end in their second game of the Cup of Traditions. They lost out to Feyenoord Rotterdam 3-1. BVB were outplayed by their Dutch opposition, as they lacked urgency for most parts of the game.

Lucien Favre fielded an entirely different starting eleven to the one he named against MSV Duisburg earlier in the day. Emre Can started in place of Mats Hummels at the back, and Erling Haaland took over from Thorgan Hazard to lead the line.

Feyenoord took the lead in the 17th minute through Jörgensen when they created a 2v1 situation for themselves, singling out Emre Can at the back. Jörgensen was played through on goal by Mark Diemers and then slotted the ball in with composure. A few minutes later, Feyenoord almost returned the favour to Emre Can, as he was left unmarked in the box. However, he headed over the crossbar.

Feyenoord extended their lead through a brilliantly worked corner. Their Brazilian central defender, Eric Botteghin, rose highest among the men in the box and headed the ball past Roman Burki.

A couple of minutes after the restart, Jorgensen made it 3-0 catching Burki out at his near post with a thunderous strike from within the 18-yard-box. The goal was a price Dortmund paid for a lapse in concentration, as Emre Can lost the ball in a compromising position, from which Feyenoord capitalised.

At the 50 minute mark the game seemed done and dusted, yet Dortmund found their way back as they gathered some momentum in the last 10 minutes. Substitute, Ansgar Knauff, added some drive and direction to BVB’s play. It was the 18-year-old who picked out Axel Witsel in the middle of the box. Witsel volleyed the ball from close range from the penalty spot.

Knauff continued to make the difference as he almost got another goal back for Dortmund. After a mazy run into Feyenoord’s half and a one-two with Pherai, Knauff’s shot was too timid to trouble the Dutch side’s goalkeeper.

Dortmund had the golden opportunity to reduce the deficit by 1 goal in injury time. However, Erling Haaland’s penalty was saved by Rotterdam’s keeper.

The game was Dortmund’s toughest test in pre-season, and they failed to match Feyenoord’s intensity and desire to win. Although it is just pre-season, Favre should be wary of this not becoming a habit.