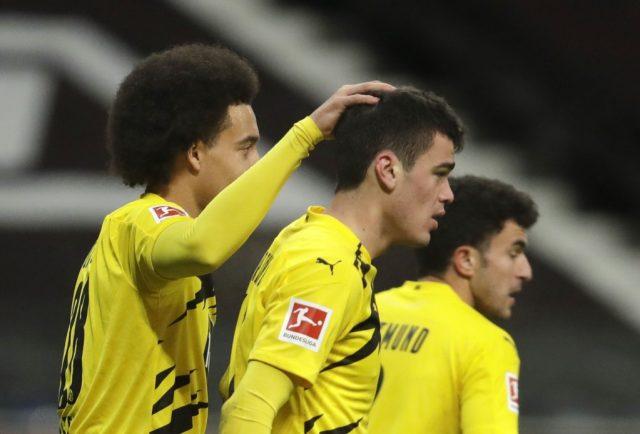 Despite an impressive second half from Borussia Dortmund, the visitors at the Commerzbank-Arena were held to a 1-1 draw.

Injuries forced Lucien Favre to make a couple of changes to the starting line-up. Left-back Raphael Guerreiro has a minor muscular injury, which meant that long-term absentee Nico Schulz took his place.

Further, Manuel Akanji’s knee problems caused Dan-Axel Zagadou to make his first start in the Bundesliga in the 2020/21 season. Thankfully for Favre, Mats Hummels was able to start the game even if he faced discomfort in his foot.

Eintracht Frankfurt started the game on the front foot, creating a clear chance in the opening minutes. If not for Nico Schulz’s last-ditch tackle on Durm, Dortmund could have been 1-0 down very early.

However, Frankfurt had another golden opportunity in the ninth minute, and this time they converted. Daichi Kamada was played through on goal by a ball which split Dortmund’s back three apart. Roman Burki wasn’t fully committed to rushing off his line, and that made the finish easy for Kamada.

Before the first half concluded, Jadon Sancho had 2 left-footed shots which nearly found the back of the net. The first was a curler, which didn’t have enough dip on it to reach the top corner. While the second was a cross-shot which went across the face of the goal and wide of the far post.

Dortmund came out all guns blazing in the second half, with Giovanni Reyna’ thumping shot levelling the scores. The American International was fed in by Sancho, and his finish from the edge of the box carried too much power for Trapp to do anything about it.

The comeback appeared to be on. However, Dortmund’s lack of fire-power upfront was the reason they couldn’t score again. The only other obvious chance fell to Reyna, whose shot was cleared off the line. Had the ball gone in, the officials would have disallowed the goal for offside.

Dortmund’s first draw of the 2020/21 season sees them climb a place on the table to third. However, fourth-placed Bayer Leverkusen has a game in hand against Schalke on Sunday.

Certain aspects of the game impressed the head of the Licensed Players’ Division, Sebastian Kehl.

He said, “Gio Reyna produced a very good performance, not just because of his goal. He was always dangerous in one-on-one situations and got the reward with his goal. But there was also good build-up play from Jadon Sancho, who was involved in a lot of good moments as well. Dan-Axel Zagadou played again for the first time in a long time; he was a bit tired by the end too.”