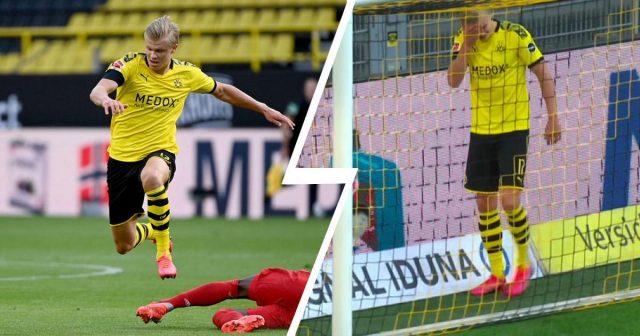 The Norwegian teenager Erling Haaland enjoyed 72 minutes of play in the fierce Der Klassiker game as he twisted his knee after a collision with the referee in the early parts of the second half before eventually going off.

Despite the early pains, Erling Haaland made attempts to play through it but subsequently had to be substituted after trying race onto a cross from Jadon Sancho.

Halaand was all determined together with his team mates going up against a tough Bayern Munich side as Borussia Dortmund were hoping to close in the gap in order to keep their title hopes alive.

Unfortunately for the Black and Yellow, they gave up all three points at the Signal Iduna Park courtesy of a Joshua Kimmich beautiful chip.

Dortmund upon several attempts were unlucky not to find a breakthrough and while fighting on to clinch a point, Halaand suffered a problem with his right knee.

However, Lucien Favre insists the striker’s injury is yet to be checked but he is hopeful the teenager would not be on the sidelines for long.

During the post-match interview, Favre said, “I don’t think he’ll be out for long. He’s got a knee injury. We don’t know at the moment exactly what it is.”

Halaand already has 10 goals in eight starts and 3 appearances for Dortmund but was unlucky today in his first Der Klassiker game and it was entirely a frustrating game for the men in Yellow at the Signal Iduna Park.

Lucien Favre did not hold back as he admitted missing their great Yellow wall with all games set to be played behind close doors.

“Of course everyone knows that we miss our fans at the games, In the second half, for example, we would have played in front of the Yellow Wall. And of course we miss that.” said Favre.

Nonetheless, he refused to push blame on the absence of their fans for his side’s 1-0 loss against Bayern as he indicated that his side weren’t clinical enough today.

He said, “We missed the penultimate and the final pass and a little bit of precision. And a little more movement we would have needed. The right movements.”