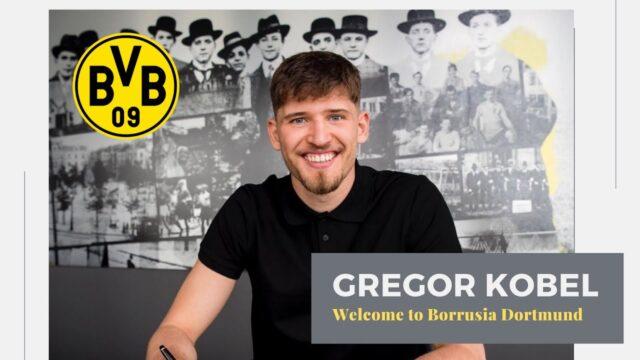 Borussia Dortmund have officially completed the signing of Gregor Kobel from German Bundesliga rivals VfB Stuttgart ahead of the 2021/22 season. The Switzerland international has penned a five-year deal at the Signal Iduna Park until the summer of 2026.

The goalkeeper joins the Black and Yellow squad in a deal worth 15 million Euros, the second most expensive goalkeeper in Bundesliga history after the 30 million Euros fee Bayern Munich paid to sign Manuel Neuer from Schalke in 2011.

After a season where there were many concerns from the goalkeeping department, signing a new goalkeeper was always going to be the priority of the club in the summer transfer window.

Despite being linked with a handful of shot-stoppers, Kobel was always seen as the first-choice among the club’s executives.

Speaking after signing for the club, the Swiss said: “Borussia Dortmund is one of the biggest and most famous clubs in the world. A club that has the ambition to fight for the championship and the DFB-Pokal every year and to play in the Champions League. It makes me proud to be able to play for BVB. I want to play my part in Dortmund’s future successes.”

“You can see on the pitch that I’m a very emotional guy. To stand on the pitch in front of more than 80,000 spectators in Dortmund after the pandemic, in this atmosphere – I’m already looking forward to it!”

“You can see on the pitch that I’m an emotional guy. Being out on the pitch in front of more than 80,000 fans after the pandemic, in that atmosphere – I’m already looking forward to it now!” pic.twitter.com/F2XYTBY04B

The 23-year-old only joined Stuttgart from Hoffenheim in the summer of 2019 and has earned himself the opportunity of being one of the best young shot-stoppers in the league. Gregor Kobel managed five clean sheets in 33 league games en route to Stuttgart’s ninth-place finish in the just-ended season.

His arrival also puts Roman Burki’s future at the Signal Iduna Park in huge doubt with a possible transfer away from the club very likely.