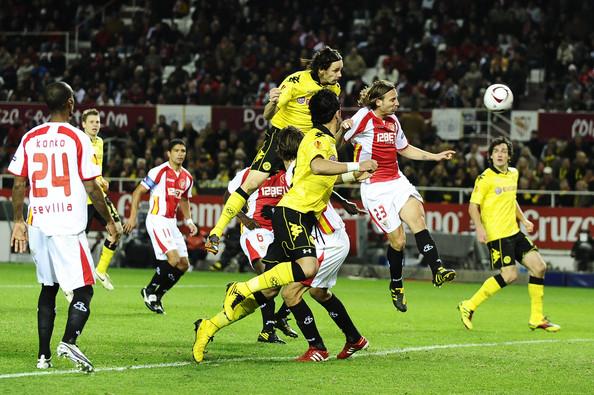 On the 14th of December, Borussia Dortmund discovered that they would face Sevilla in the UEFA Champions League Round of 16. The draw happened just a day after they sacked Lucien Favre from his job as head coach and appointed Edin Terzic as his replacement.

FC Barcelona, FC Porto, Atalanta, and Atletico Madrid were the other possible draws which Dortmund may have received. However, former Dortmund forward, Stéphane Chapuisat, drew Sevilla for the Black and Yellows.

Sevilla are not an easy opponent and are known for their success in knockout tournaments such as the UEFA Europe League, where they are the most successful team with 6 titles.

Later in the day, UEFA confirmed that they scheduled the games between Dortmund and Sevilla for the 17th of February and the 9th of March. BVB will have the advantage of playing the second leg at the Signal Iduna Park, as they finished first in Group F of the Champions League.

This is how Borussia Dortmund’s top structure reacted to the draw:

Edin Terzic (Head Coach): “There are no easy opponents left in the Champions League by the time mid-February comes around. There’s a reason Sevilla have won the Europa League frequently in recent years. We’re looking forward to the task.”

Michael Zorc (Sporting Director): “Sevilla are one of the absolute top teams in Spain. We know from facing them in the Europa League 10 years ago that we’ll be up against an unpleasant opponent that is very focused on the result and often gets it too.”

Hans-Joachim Watzke (CEO): “This is an ambitious, interesting task. We’re up against a good opponent, but we believe we’re their equal.“