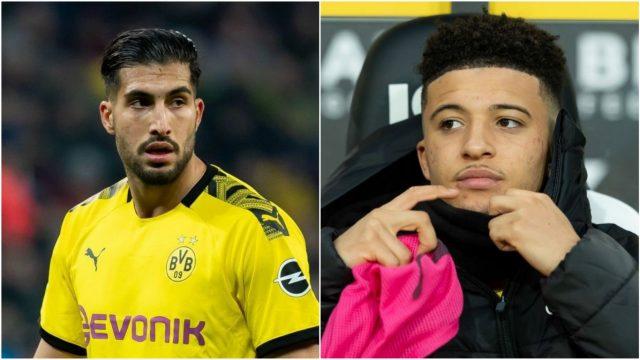 Borussia Dortmund midfielder Emre Can has urge teammate Jadon Sancho to stay away from a move to the Premier League.

Sancho has been in the papers since last summer being linked with the likes of Manchester United, Chelsea, Real Madrid and Barcelona, with Paris Saint-Germain also being credited with interest.

Emre Can, who joined Dortmund in the January transfer window on an initial loan before later being permanent has encouraged his mate about the possibility of staying at the Signal Iduna Park for the rest of his playing career.

Speaking with Sport Bild on his opinion about the 20-year-old leaving Germany, he said: “I’d tell him to stay here, so we can play together forever. There aren’t many players with the class that he has. I noticed that pretty quickly. He’s enormously important for us.”

Sancho has been heavily linked with a move to Manchester United with Ole Gunnar Solskjaer’s side having a keen interest in the youngster. However Can sees no reason why the England international should trade Dortmund for the 20 times English champions.

“I see no reason to put United above Dortmund. Neither from a sporting perspective nor in terms of attractiveness,” the former Liverpool midfielder said.

Can missed Dortmund’s 4-0 win over Schalke 04 last weekend with an injury but Lucien Favre is hoping to have him back soon, while Sancho came on for the last 12 minutes of the game.