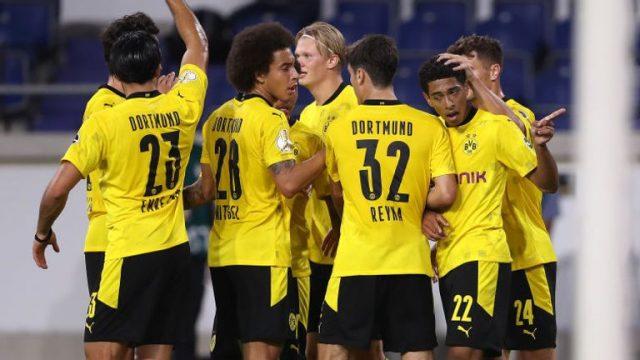 Borussia Dortmund’s emphatic 5-0 win over MSV Duisburg in the first round of the DFB-Pokal cup caught the eyes of many. The goalscorers ranged from youngsters Jude Bellingham, and Giovanni Reyna to the club’s captain Marco Reus.

There were a couple of interesting records which were broken during the game:

1 – BVB’s youngest ever goalscorer: Borussia Dortmund’s latest signing, Jude Bellingham, became the club’s youngest goalscorer in the club’s history. On the day of the game, Bellingham was 17 years and 77 days old. He scored the second goal of the game. Until the Englishman scored, it was Nuri Sahin who held the record. The Turkish midfielder was 17 years and 82 days old when he scored for BVB against FC Nuremberg.

2 – BVB’s fastest Goal by a Substitute: All of us were waiting for the day Marco Reus returned to play competitive football for the black and yellows. His return was definitely worth the wait. The skipper came on in the 56th minute of the game, and within 3 seconds of the ball being in play, Reus scored. He took a neat touch and slotted the ball into the back of the net when the ball was played into him from an indirect free-kick.

3 – Two 17-year-olds: For the first time ever, two 17-year-old were named in the same starting lineup for BVB. Jude Bellingham and Giovanni Reyna both started the game, and to make things better they both scored.