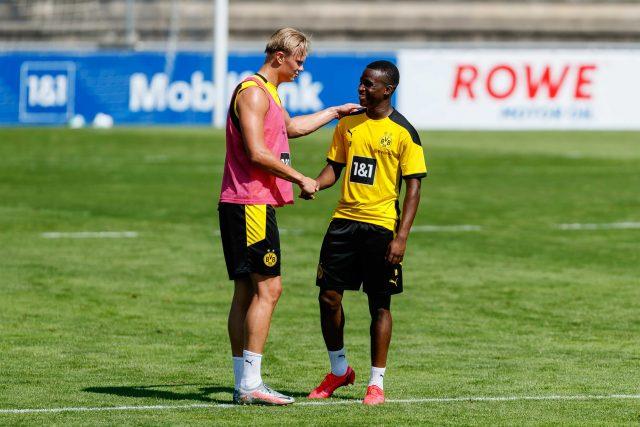 Borussia Dortmund’s newest wonderkid, Youssoufa Moukoko, finally turned 16-years-old! This means that he can finally play in the Bundesliga for the senior Dortmund squad.

The Cameroon-born star trained with the senior squad earlier, however, he wasn’t permitted to play for them as per league regulations. In his 88 youth games for Dortmund, he has scored 141 goals, which is simply an incredible record.

Youssoufa Moukoko has scored 51 goals in 32 games for @BVB‘s U19s, against players up to four years older than him.

Today he turns 16 and is eligible to make his debut for the club as early as this weekend.

Upon turning 16, Moukoko posted on his Instagram: “I will continue to do my thing. That is my passion. That is what brings me joy.”

This is how people associated with the club reacted to Moukoko turning 16:

Manager, Lucien Favre: “He’s allowed to play with us. We’ll see if he goes to Berlin with the team. That hasn’t been decided yet. He has fantastic potential. He’s doing very well in the first team. It’s fun to train with him.”

Former player, Nuri Sahin: “As of yet, the sun always shines for Youssoufa. He hasn’t had any rainy days, but these rainy days will come.”

Sporting Director, Michael Zorc: “Very refreshing for the squad and team and an important part of our future.”

Head of first-team, Sebastian Kehl: “It’s a big step for him, a process. We have to give him the time and rest he needs.”

If Moukoko takes part in the game against Hertha Berlin on Saturday night, he will break the record for being the youngest player to feature in a professional game in Germany.