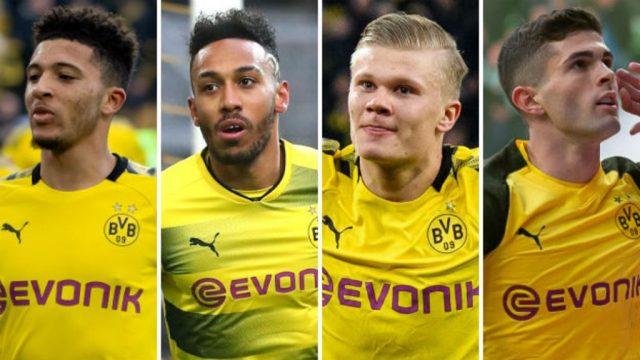 Borussia Dortmund are gaining a reputation for signing young players from around the world and developing them into world-class players. This has been evident through the likes of Jadon Sancho, Christian Pulisic, Ousmane Dembélé. This is probably what is drawing more youngsters to Dortmund such as Erling Haaland, Giovanni Reyna, and now Jude Bellingham.

Perhaps the most accurate representation of Dortmund’s ability to scout and acquire foreign talent and transform them to a world-beater is Jadon Sancho. Sancho is an Englishman who signed from Manchester City before the start of the 2017/18 season. He failed to break into Manchester City’s squad, but Dortmund wasn’t oblivious to his apparent talent.

Sancho signed for around 7 million Euros at the age of 17. He is believed to be worth over a 100m Euros now. In the space of 3 seasons, Sancho’s development has grown into unexpected territory. He has scored 30 times and assisted 38 goals in the 78 appearances he has made in the Bundesliga. These are impressive numbers for an experienced, well-established footballer let alone a youngster in a foreign league. Sancho is now Dortmund’s biggest asset, attracting viewers from around the world. Further, he is the subject of transfer speculation from some of the biggest clubs in England (Manchester United, Liverpool, Chelsea)

Dembélé’s first professional season in the Ligue 1 caught the eyes of some of the biggest clubs around Europe. Yet, it was Dortmund who were going through a bit of a rough patch in the 2015/16 season, managed to get his signature.

The first indication of Borussia Dortmund’s fore-sightedness in the scouting of foreign talent was Christian Pulisic. Pulisic signed for the Borussia Dortmund U-17 team in the beginning of 2015. It took the American International less than a year to break into the first team. He made his Bundesliga debut in January 2016 and scored twice in his three starts before the end of the season.

Pulisic continued to develop under Dortmund with his best numbers in the 2016/17 season (3 goals and 8 assists). Followed up by 4 goals and 6 assists in the 2017/18 season. Soon enough he was picked up by Chelsea for around 57 million Pounds in the winter transfer window of the 2018/19 season.

It will be interesting to see if Dortmund can actually use these players to develop an even stronger squad that wins league titles. Erling Haaland, Giovanni Reyna, Jadon Sancho, Mateu Morey, and soon enough Jude Bellingham will be a part of a young squad that want to win their first Bundesliga in 8 years.