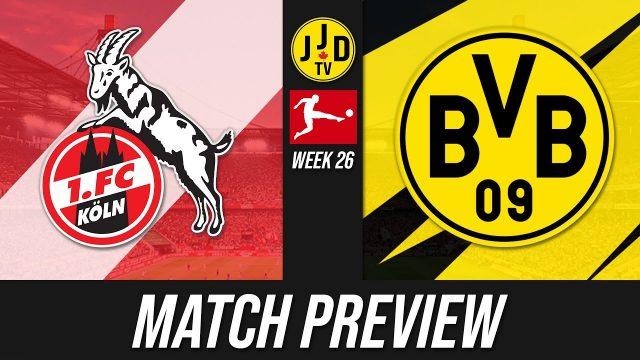 With just two points away from the fourth position, Borussia Dortmund will be hoping to make the cut when they play FC Koln over the weekend.

The two teams will battle it out for all three points at the Rhein Energie Stadion on Saturday.

Despite lying in the 14th position, the home side are far from safety, with just a point separating them from the relegation zone.

Dortmund has had some purple patch of form, losing just once in their last eight games across all competitions while also booking their place in the quarterfinals of the UEFA Champions League.

FC Koln are without a win in their last five games and that will be a good game for them to turn their season around. They won the reverse fixture at the Signal Iduna Park back in November and would be hopeful of another one over the Black and Yellows.

Jannes Horn is set to miss the game after picking up his fifth yellow card of the season in their last game. Markus Gisdol will also be without Sebastian Bornauw and Florian Kainz due to injury.

For Edin Terzic, Jadon Sancho is a huge doubt for the encounter. Marco Reus’ inclusion is also doubtful while Mateu Morey, Mats Hummels and Raphael Guerreiro are unlikely to be involved.
The gaffer could make significant changes to his squad as part of managing the injury concerns.